What’s that on the hill I hear you say? 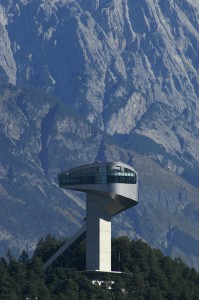 Well that’s the famous Bergisel hill and ski jumping facility. The Bergisel hill measures 746m and lies in South of Innsbruck, in the area of Witten, where the Sill river meets the Inn Valley.

The Bergisel hill is well-known for a number of reasons, one of them being the battles which took place here between April and November 1809. The 4 battles of Bergisel were fought between the forces of Emperor Napoleon I of France and the Kingdom of Bavaria against Tyrolese militiamen and a contingent of Austrian regular soldiers at the Bergisel. The 4 battles were part of the Tyrolean Rebellion and the War of the Fifth Coalition and were under command of the freedom fighter Andreas Hofer. Following the final battle in November, the rebellion was suppressed. In 1892, the Andreas Hofer monument was erected in Bergisel in order to commemorate these battles.

Bergisel is also well known for its ski jumping facility which opened in 1930 and was expanded in 1964 and 2003, to an impressive capacity of 26,000. Since 1952, each January, the facility has hosted one leg of the Four Hills Tournament of world cup ski Jumping. Not only is the facility used during the winter months, but also in the summer time where the world’s best ski jumpers come and train in preparation for the competitive season.

A new tower-top restaurant called the Bergisel SKY was built in 2014 and offers panoramic views of Innsbruck and the surrounding area. Fortunately, the elevator whisks guests up to the restaurant within a couple of minutes. This is a fantastic place for a bite to eat whilst taking in the incredible views. 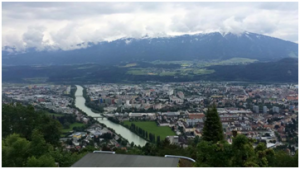 Bergisel also boasts both the Brenner railway and the Brennerautobahn below, along with the Sill Gorge recreational site located at its base. The Brenner railway is a major line connecting the Austrian and Italian railways from Innsbruck to Verona which provided beautiful scenery as it climbs up Wipptal (The Wipp Valley) and passes over the Brenner Pass.

Bergisel is easily accessible from Innsbruck, either by taking the Stubaitalbahn and exiting at the Sonnenburgerhof station, or by tram number one which runs from the centre of Innsbruck directly to the Bergisel tram station.