After catching the first ‘bin’ up the Téléphérique de l’Aiguille du Midi at 7.30 on a sunny late-August morning, my good friend Olly and I had a plan in mind to climb Mont Blanc du Tacul. The idea was to scope out the ‘Trois Monts’ route up Mont Blanc for later in the summer. A considerable amount of snowfall at high altitude the previous couple of days had put some doubt in our minds as to how stable conditions might be, however we decided to persevere with a back-up plan of climbing the Chamonix classic, ‘Cosmiques Arête’. 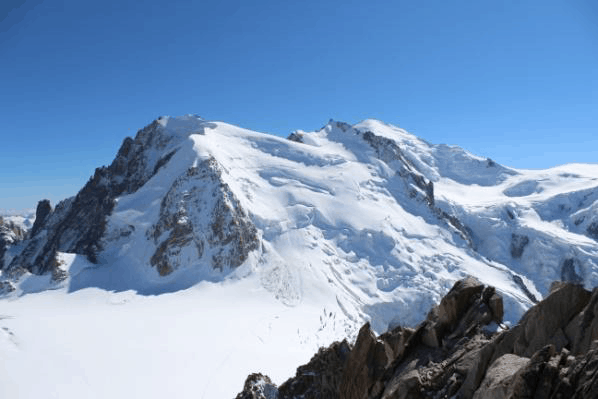 The cablecar journey was as entertaining as ever with hoards of multinational tourists shrieking and wooping as the first part of the two-part cable car soared over the pylons making everyone’s stomach lurch and taking tourists by surprise.

Upon arrival at the top station, we quickly made our way to the ice-cave exit and were instantly startled at how crevassed the Midi Arête had become over the long, hot summer. Indeed the ice-cave had receded massively from the previous winter and was practically non-existent.

Quickly we put crampons on, roped up and started the decent down the arête. It felt strange to be making this descent without the weight of skis on our backs: this is a route well-trodden by Olly and me in previous winters as it the starting point for some of the world’s best off-piste skiing – most famously the Vallée Blanche, but also the steep NW face by the Cosmiques Couloir and the Glacier Rond.

Large crevasse at the top of the Midi arête.

As we descended off the arête and along the glacier towards the Cosmiques refuge, we passed a number of mountaineers who had been camping over night on the snow and ice before tackling the surrounding peaks. We watched climbers making the long ascent up the granite slabs on the south face of the Aiguille du Midi and the famous Rebuffat route- one of the most spectacular yet accessible traditional rock climbing routes in the Mont Blanc Massif.

On approaching the foot of the Tacul, it was evident from the lack of bootpack in the fresh snow that no-one had yet climbed the route since the recent snowfall. This was disconcerting as it is a popular mountaineering route. The sun was already high in the sky warming up the fresh snow and there was enough avalanche activity on the surrounding slopes to discourage us from chasing our primary objective. We resorted to Plan B – the Cosmiques Arête. 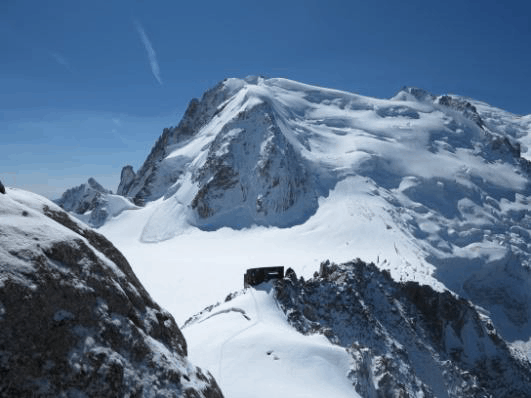 Avalanche debris on the Tacul, Refuge des Cosmiques in the foreground. 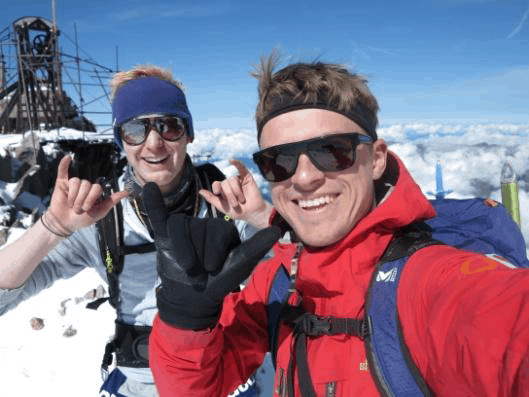 Ferg and Olly Excited to start the Climb

The Cosmiques is a mixed snow and ice alpine climb which traverses the ridge from the Abri Simond to the Aiguille Midi and can take anywhere from 2-5 hours. This is a true Chamonix classic and any aspiring alpinist must have this route under their belt! The majority of the route can be completed by moving together, roped up, except for the crux pitch (grade 4c) which required the use of the fixed belay points and some additional protection. Crampons are required throughout. 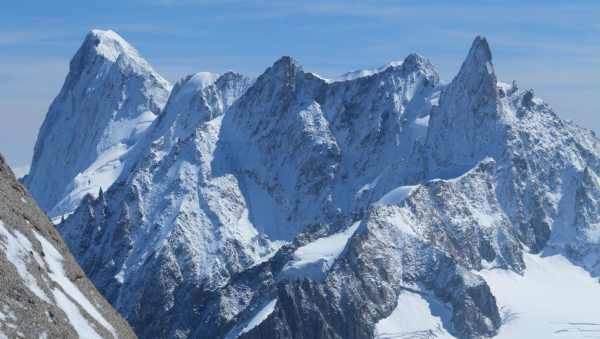 We set off and made steady progress moving up and along the arête with little difficulty. The ridge feels relatively safe and sheltered: the number of climbers on the ridge at any given time certainly enhances this feeling of safety and the climbing is not particularly technical except for the crux pitch. The consequences of falling can, however, be quite severe and the prospect of a fall onto the Glacier Rond far below, is not one worth dwelling on.
This is one of the most easily accessed yet spectacular and rewarding mixed climbs in the Alps, and as such it receives huge amounts of traffic in both winter and summer. At several points there is no alternative other than to sit and wait for the groups ahead to clear the pitch before making further progress. At one such traffic-jam we got talking to a friendly couple of chaps from Manchester named Hamish and Alfie. We agreed to continue together as a team of four. Other climbers we shared picnic spots with included Italians, Swiss, Americans and Spanish. 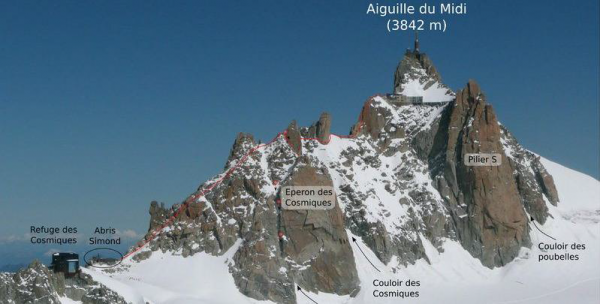 The boys survey their playground!

The crux pitch of the climb is a slab of rock with a nice finger-width crack to grip onto. It is unequipped and is really the only part of the climb that required the use of self-protection in the form of cams or nuts. While this could be climbed in rock shoes, it is almost always climbed with boots and crampons and there are actually indentations in the rock for you to place the toe points of crampons, which did feel a little like cheating to us…

Our new friends were more experience climbers than Olly and myself and, having done the route before, they were able to guide us in the right direction, thus elevating any route-finding difficulties we might otherwise have encountered. While not a particularly challenging or technical climb, this was still a big day for me and Olly: we have both spent considerable amounts of time in Chamonix and in the high mountains over the past two years and gradually our confidence is growing thus allowing us to safely explore our backyards as our skills and experience increases.

The beauty of this climb, other than the obvious the breath-taking scenery, is its proximity to the top-station of the Aiguille du Midi cablecar. At any point on the climb, you are never more than 200m from the safety of that infrastructure. Indeed the Midi is the start and the end point of the climb so it is extremely accessible. The end point is right on one of the viewing terraces, therefore always provides an interesting spectacle for tourists to see climbers in helmets and crampons standing on the final rock pillar before clambering to the safety of the terrace.

Tourists marvel as climbers complete the climb and clamber over the barrier onto the viewing terrace.

All things considered, this was one of the best days I have spent in the mountains this summer. We had everything from perfect weather, great company and it wasn’t even my day off!