There are rare occasions in life where a view is simply so pleasing to the eyes that ones other senses cease for a few brief moments.  The Stillup Valley, Mayrhofen, Zillertal is a location of such beauty that this effect has been known to occur. There are not many places left in the world that are closed off entirely for half the year, allowing nature to take effect, entirely undisrupted.

The Stillup Valley itself is composed entirely of privately owned farm land and is owned by fifteen different families from the Zillertal. It is the shortest of the four major sub valleys that stem out from Mayrhofen, with the entrance just peeping through a narrow mountain gap behind the famous Ahorn Mountains.

Stilluptal is a geographic wonder; hanging valleys lay all the way along both of the surrounding ridges creating a multitude of breathtaking waterfalls that feed into the gently flowing Stillupbach river. Up on a recent Stillup stroll, I couldn’t help but be inspired by the beauty of more than fifteen truly unique waterfalls. This glacially carved valley has roots that stem back to the ice age; one can witness the specific valley shape of the narrow Stilluptal from various points along the gentle walking route through the valley. 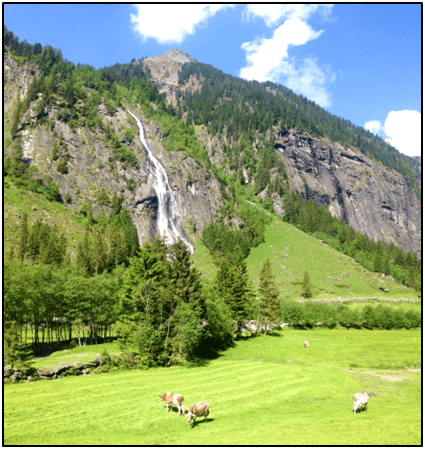 One of the many waterfalls of the Stilluptal

One of these views is from Grune Wald Refuge, one of the four mountain hüttes evenly spread along the short eight kilometre valley. Stilluptal is also home to guest houses including the rather unique, Gast Haus Wasserfall, located on the iconic emerald green Stillup Basin. The other, the Stilluphaus, located directly in the centre of the valley, offers unique experiences such as live harp waltzes performed on the sun terrace overlooking another majestic waterfall.

Wildlife is thriving in Stilluptal, from the curious dear that hide and watch the world go by, to the large eagles that score in the sky. There are also live stock roaming the fields that lay beneath waterfalls; cows with bells hung around there necks, with different chimes and tones pleasantly distinct in the cool valley. Small herds of mountain goats can be seen drinking and grazing along the Stillupbach river in the summer sun. The cows are truly unique animals, herding in groups of mixed species and rounded up by the farmer’s dogs. The milk from the cows is used to make Hay Milk; this is the most traditional and earliest form of milk production. Hay milk has been described as having a better taste and is thought to be nutritionally beneficial to consume, more so than the more modern counterpart. It is believed that the milk gains its characteristic flavour from the vast diversity of fodder the cows consume whilst grazing in the mountains which include a variety of wild herbs. 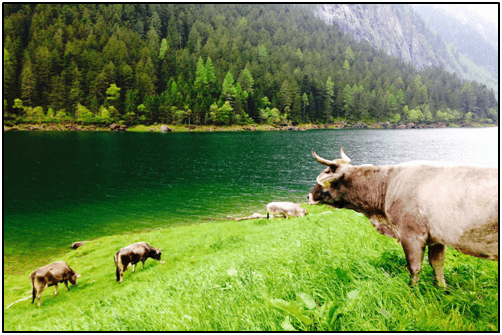 Towards the beginning of the Valley, nestled just behind the Ahorn mountains is the Stillup Speicher (Dam). The 2.5 km reservoir was built in the 1960s and has a very unique colour. In the summer sun minerals within the water excite turn the lake a crystal clear emerald green, whereas in overcast conditions, a spectacular turquoise green can be observed. The dam is the main feed to the Mayrhofen hydroelectric power station. Hydroelectricity is a huge matter in the Zillertal as most of the valley is powered in this way even through winter when the need for electricity is dramatically increased.

The Stilluptal is truly an amazing place, a must for all travellers, sightseers and walkers. I hope to see you here soon!