Our very own Snow Angel, Sam Cope gave us an insight as to why Austrian resorts should be hailed as the champions of Apres.

To say that après ski is a big deal in Austria is a slight understatement. And even though the French and Swiss resorts have come on leaps and bounds in terms of their straight from the slopes offerings, nothing quite hits the mark like a tankard of lager and a shot of jaeger in the Mooserwirt in St Anton or a gluhwein in the Nederhutte in Obergurgl.

And with all of Inghams great Austrian January deals, there’s even more reason to hit the Austrian après scene… To make sure you don’t miss out on the best places to eat and party, here are some little gems from our favourite resorts.

This place needs no introduction in terms of après ski… Make sure you tackle the Krazy Kangaroo and the legendary Mooserwirt, in that order, at the end of the ski day. Expect shots of jaeger aplenty, ever appearing giant pitchers of lager and fantastic DJs blasting out seriously good tunes on the terrace. And if you’re not too shaky after that, tackle the last run back down into resort…

For the traditionalists amongst you, head to the Sennhutte, home of DD Dueser and Austrian singer/comic and impressionist. Not only is this place a great lunchtime option but there’s great straight from the slopes après here, with a traditional ooompah band. 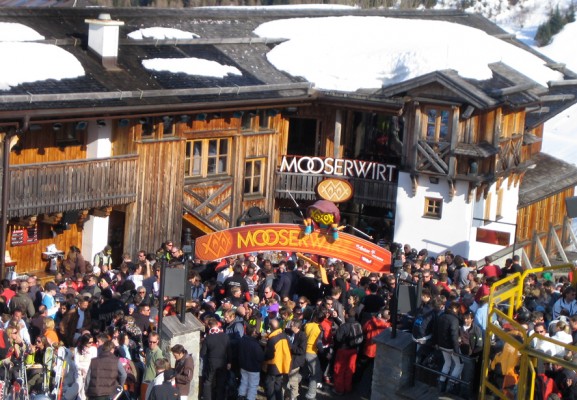 With heated chairlifts and quiet slopes it’s no surprise this is a favourite with the Royals. The après is a classy affair, but that doesn’t mean things don’t get lively here. Our favourite restaurant is the Tritte Alpe; you’ll find this mountain hut on the blue run 3 down into Zurs. It’s the perfect place for lunch with plenty of outdoor seating and deck chairs. It gets packed out from 12 noon most days. The real party kicks off at the Balm Alp at around 3pm. With 360-degree panoramic views the outside bar area and terrace and some interesting entertainment in the form of a bongo playing, Bez style bartender who gets the crowds here going until way after 7pm. If you leave late enough the blue run back down is already bashed so it’s almost as good as the first run of the day, providing you’ve gone steady on the gluhwein that is. If you ask nicely enough the owner will bring you back down to earth on his skidoo.

If you’re looking for more of a crawl then head to the Hotel Krone for a cheeky Bombardier then on to the Schneggerei. If you’ve been to the Balmalp first you’ll probably see a lot of familiar faces in here. This wooden hut sits right at the bottom of the main ski run down into Lech so is a great place for ‘one more beer’ before you head back to your hotel. There’s a BBQ outside, a suntrap terrace, weekly DJ nights and this place does the best pizzas in Lech. 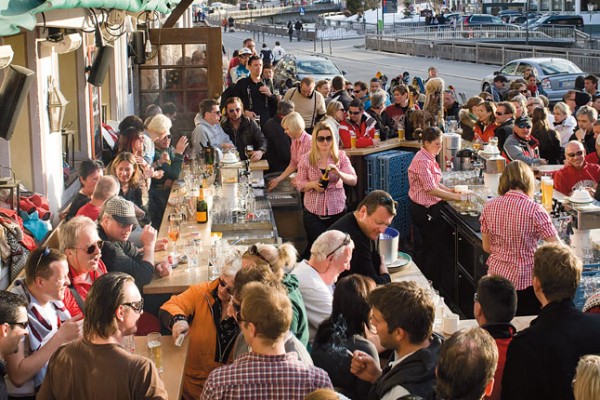 Ischgl needs no introduction, we like to call it Ibiza on ice, especially as it’s home to super club Pacha… The action kicks off here in November this year with Nickelback opening the resort for the season…. However if you don’t make it out there for that, here’s how we’d spend an afternoon there. Ski down the home run to the lower half of the village, or take the Pardatschgratbahn lift and head for Kitzloch for that first après-ski drink.

Then down the road to Niki’s Stadl. All your favourite après-ski songs here and more, with Niki as DJ and videos of Niki singing in various locations – on a yacht, riding a camel, in the mountains – alongside a row of singing marmots – weird? Yes, we love it!

Cross the road and head to Schatzi where girls in skimpy dirndl outfits dance on the bar, then head on to Trofana Alm. There’s a model of a bear outside, which nods, waves and says: ‘Gruss Gott’ to passers by (God’s Greeting – or welcome).

The town quietens down between 7.30pm and 10pm when people head back to their accommodation for dinner and many of the bars, including Trofana Alm and Schatzi become restaurants after 7.30pm.

After dinner take a look at the Golden Eagle pub in the village centre. It has a red phone box outside.Then up the hill behind the pub towards the church and call in at Kiwi bar. The locals like this bar. Great to chat over a quiet drink. Take the lane behind the church and head for the Designhotel Madlein. Open to non-residents, the lounge has a roaring fire, a chic bar and lovely cocktails.In the basement of the hotel are the nightclubs Pacha and Coyote Ugly. 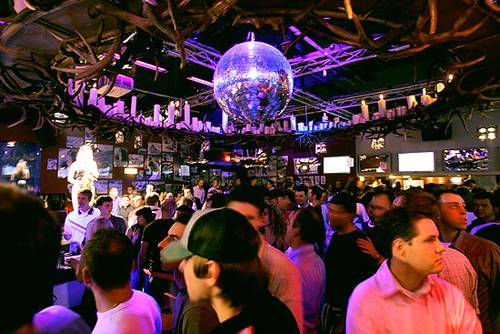 We can’t let a season go by without spending a week in Switzerland’s Saas Fee, but it always seems to take us just as long to recover. When you’re skiing till dark and partying till dawn, only the truly hard-core survive.

You don’t have to go far to find most of the après ski action, and you’ll hear it before you see it. The Black Bull is our top starting point for the first round of Jägertea (and if you get there around 4:30pm, it’s clear we’re in good company). Head there straight off the lift for the liveliest après scene in Saas Fee – the deck will be buzzing till 6ish, when it’s time to move on.

Word to the wise: shots trump pricey pints in Saas Fee, and they’re best knocked back with your entire group. Warm up with a Flaming Orange at Iglu Bar, and check out their event listings to see if the nightly event they’re hosting is worth staying for. If you’ve been away a while, remember that Jam Nights have moved to Dom Bar, which you’ll find in the former Popcorn venue.

And yes, Popcorn is still the only place to be seen after dark – unless you’re more of a Poison person. Locals and English-speaking visitors alike are still debating which one’s brilliant and which is just notorious. The all-night dance scene and epic theme parties at Poison are always fun… But with a cutting-edge slate of live DJs, decently priced beer and some of the best bartenders in town, we think Popcorn wins this round. And remember you can also stop by for lunch the next day: their tasty schnitzel sandwiches from behind the bar make the perfect cure for your hangover. 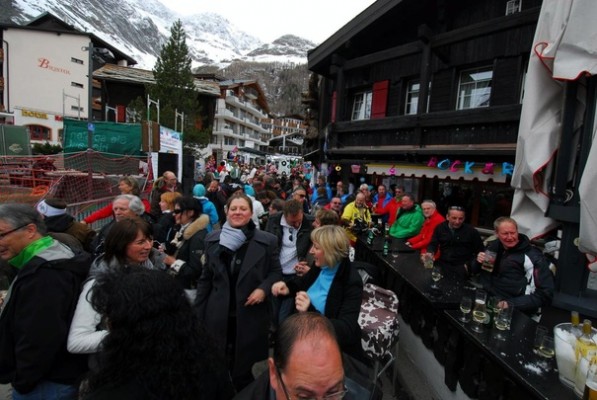 If you’re looking for straight from the slopes après then in Obergurgl you’ll be spoilt for choice. The Top Mountain Star would be our first stop. At 3080 metres above sea level this 360 degree bar has a viewing platform, which looks out all the way across to the Dolomites. There’s a great cocktail menu here to enjoy too while you take in the views.  Next up is the Nedderhutte; this place rivals St Anton in terms of après. Head her every Monday, Wednesday and Friday, when the family band kick off the entertainment.This place epitomises what we love about Austrian après, expect to see all generations here dancing on the tables by 5pm, free flowing gluhwein and amazing sharing platters if you’re peckish.

If you’re up for skiing back you’re only one run away from the town centre. However if you’ve enjoyed a bit too much Austrian hospitality, the staff will take you down on a skidoo.  If you’re in the market for something a little more low key, head to the Barrel bar, in the resort centre. Made to look like a giant beer barrel, this has to be the smallest bar in Obergurgl. However what it lacks in size it makes up for in atmosphere. Make sure you take part in the nail and hammer game here… 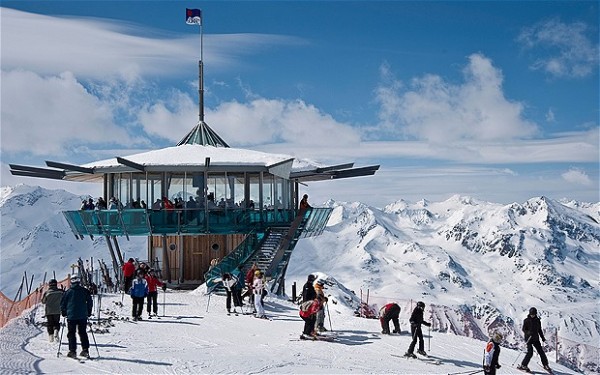 For any information about our holidays and resorts visit www.inghams.co.uk