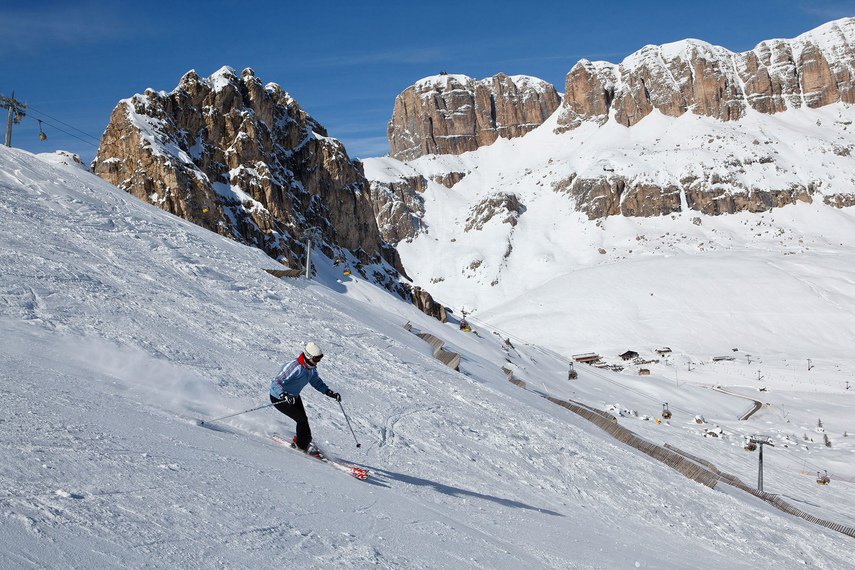 The small and picturesque village of Arabba is located in the heart of the Dolomite mountain range. The focal point of the village is the pretty 17th Century church, which serves a population of only 300 people. Though small in number, the population has grown significantly in recent years. Skiers in the winter and avid walkers and mountain bikers in the summer pack out the village throughout the year.

Even though it’s in Italy, German is widely spoken as Arabba is only a few kilometres south of Austria. However, the first language of Arabba is Ladin (not German or Italian). Ladin is an ancient language that students still learn in schools. The road signs here show the village names in three languages – first Ladin, then German, and finally Italian.  Reba is the Ladin name for Arabba. Locals claim this translates as ‘landslide’ or ‘avalanche’!

Hopefully you won’t see any “rebas” during your ski holiday. What we hope you will see though, are the epic views from the top of the Marmolada Glacier. The glacier provides some of the best skiing in Arabba and is the starting point for the longest run in the Dolomites. Totalling 12km and with a vertical descent of 3,269m, the run takes you through gorgeous scenery down to the charming hamlet of Malga Cipela.

The Marmolada Glacier is also home to Europe’s highest museum, the Great World War Museum. The museum is open from December through to Easter and entry is free. You can even visit the museum in your ski boots. It makes for a fascinating break from skiing. The Dolomites was a scene of heavy fighting during the First World War, and evidence of this is still visible today, such as the military tunnels cut into the mountains.

The Dolomites claims to be the largest ski area in the world covering. The area encompasses twelve piste maps and 1,200km of runs! The Sella Ronda ski circus is the pinnacle of the region, famous among skiers the world over. There are 26km of wonderful, wide-open pistes that encircle the Sella massif. As a skier, you have a choice: ski either clockwise or anticlockwise around the circus.

Arabba has enviable access to the Sella Ronda and is situated on the south-eastern corner of the circuit. Orange signage takes you in a clockwise route from the resort and green signage in an anti-clockwise direction.  I personally favour the orange route, but you should try both during your ski holiday here. It takes an average skier around 5 hours to complete (and that includes a lunch break).

Many people ask me what is the ‘best’ ski resort in the Dolomites. This is an impossible question to answer. All the resorts provide excellent skiing and have such distinctive, individual character. It really depends on what mood I’m in!

If you are visiting the Dolomites for the first time and are a dedicated skier or snowboarder, I would highly recommend Arabba. It’s probably already near the top of your list. The resort has an amazing reputation for challenging skiing, and combined with the fascinating local history and culture it gives Arraba a unique flavour – even for a resort in a ski area as distinctive as the Dolomites.

Wherever you stay in the Dolomites, I’m sure you will have an amazing time. In my opinion it is the best ski area in the World!

Find out more about Arraba >