Just like everyone else, ahead of my arrival in to Lapland I was so HUGELY excited to come to Lapland to experience all of the unmissable activities, that is, the reindeer sleigh rides, husky sleds, snowmobiling and of course, working alongside the real Santa!!

The last thing I was thinking about before departure was bringing a decent camera as I was expecting to be in darkness for at least 90% of the time! However, in spite of every extraordinary experience I’ve had, and every memory I’ve made in Lapland so far, it is the stunning natural scenery that I will never forget. Although the length of time between sunrise and sunset has dwindled to a mere 40 minutes since I’ve been here, the colours in the sky, contrasting beautifully with the icy wilderness below, are spectacular. To my delight, these scenes are so vivid that I have still been able to capture them fairly accurately on my phone camera, although of course no camera will ever be able to truly do them justice. 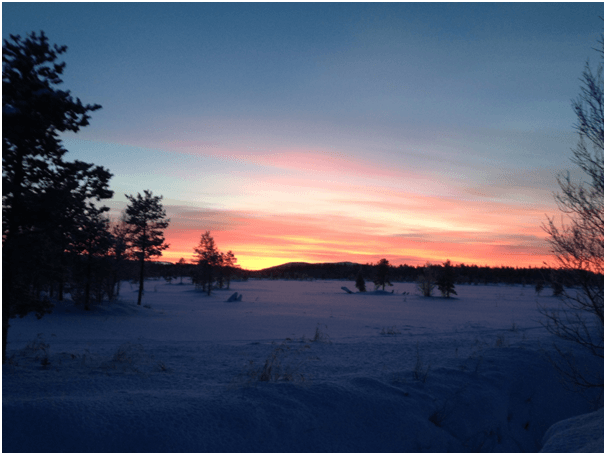 Moreover, these scenes are present for a lot longer than the official daylight hours. Due to the snow reflecting any light present, the sky is light from around nine until three during December, providing up to six hours of a constantly colour changing sky. Down in the village of Akaslompolo, the sun itself cannot be seen in the winter months as it does not rise high enough to be seen over the fell. However, any trip that takes you over the fell towards Yllasjarvi reveals a beautiful low sun which projects long rays of sunlight through the bejewelled trees. 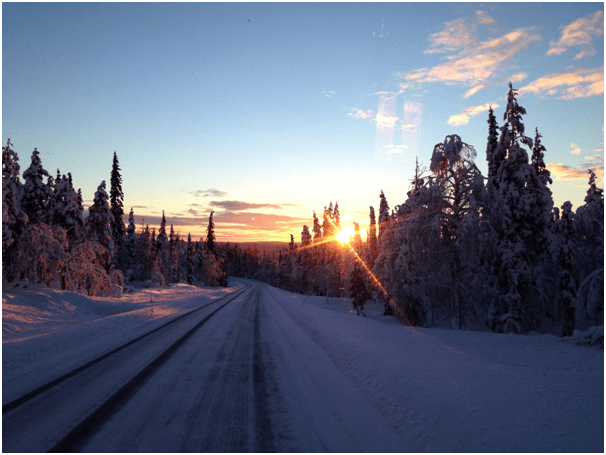 The locals, particularly the 800 that permanently live down in Akaslompolo, are, it’s true, at risk of seasonal depression due to the lack of sunlight and the all-important vitamin D that sunlight alone naturally provides. However, not only are vitamin D supplements easily accessible in the local supermarket, the locals profess that an hours exercise out in the sunlight each day wards off the winter blues. Indeed, the residents of Akaslompolo are seen daily getting out and about by their favourite means – cross country skiing. Yllas is, in effect, the capital of cross country skiing in Finnish Lapland with the highest number of kilometres of routes in the country, most of which fall within a picturesque national park. The local people of Yllas are accordingly dedicated to the sport and use it not only as a means of keeping fit and healthy, but more generally for getting around and even for walking the dog! 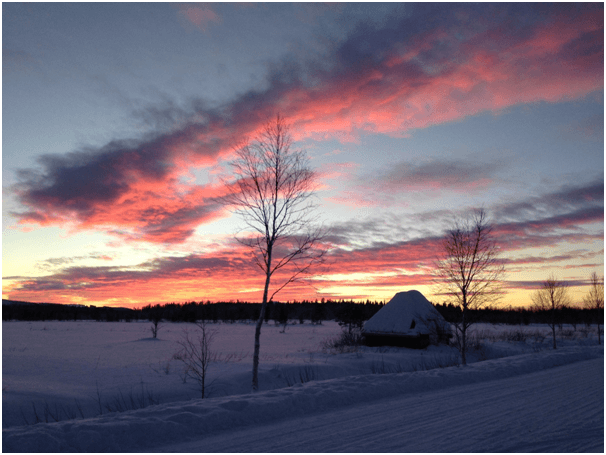 Once the sun has fully set on a colourful sky during the day, there is always a chance of further colours in the sky during the hours of darkness! I’m sure I these need no introduction but the Northern Lights are most likely to be seen on clear nights where you can see the stars. Clear skies like these, coupled with solar wind activity, result in a pale green glow in the sky which can build, resulting in clear lines of vivid green which can be in the distance or right above your head.  Getting as far as possible away from any artificial light may mean you are able to see the lights in even more detail and beauty. In the village of Akaslompolo, all street lights are switched off at 10pm to maximise opportunities of seeing the Northern Lights. 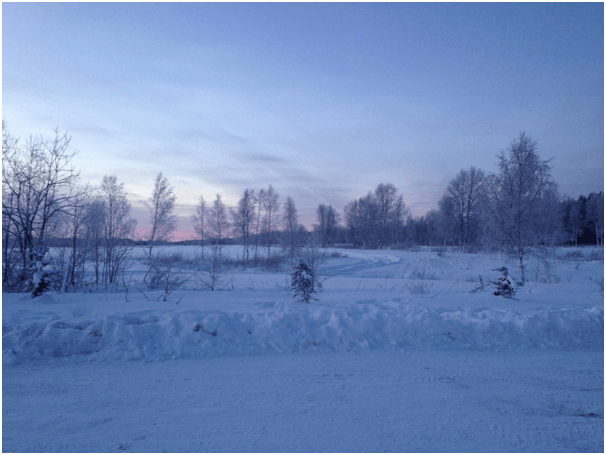 Making a special trip to stand on the edge of the magical frozen lake at the top of the village, I was lucky enough to see the lights in all their glory for the very first time. The green hue that could be seen from the lit up areas of the village resembled a clear arc like a rainbow down on the lakeside which stretched to resemble a cliff face, revealing many bands of colours ranging from green at the top to pink at the bottom. But Mother Nature can be a cruel mistress and it’s so important to remember that the lights can be fleeting! Indeed, I once contacted a friend with a decent camera but by the time they arrived, the lights at that magnitude had gone. However, faint greens were still visible in the sky from time to time, almost like clouds drifting in the wind. The good news is that a decent camera is capable of capturing more than the eye can see. Taking pictures using a slow shutter speed (up to 30 seconds when the lights are very faint) revealed vivid green swirls in the sky. So it’s always worth seeing what the camera can pick up when the temperature is low and the skies are clear and full of stars! 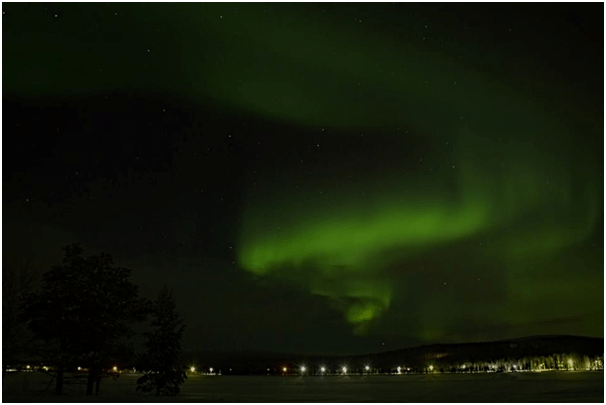