Social skiing offers the carefree flexibility to ski with likeminded skiers (or boarders, of course) for sole travellers or those of us who simply find reading the piste map a little too much to bear. However, what has been scuppered over recent years by changes in the legislation to ski hosting, is not yet ready to die a death! Despite social skiing being disallowed in the direct ski areas of St Christoph and St Anton, Inghams are able to offer two days of social skiing in the nearby areas of Lech and Sonnenkopf. With both resorts nestled in the Arlberg region itself, the whole area lift pass even covers these trips with no additional expenses!

Via shared transfer with other guests, the drive over to Lech takes around 20-25 minutes. On the coach it’s then completely up to you whether you would like to spend the day in the ‘white ring’ group or the ‘cruisey blue’ group. Once in Lech, the groups are split with a maximum of 12 to one rep. 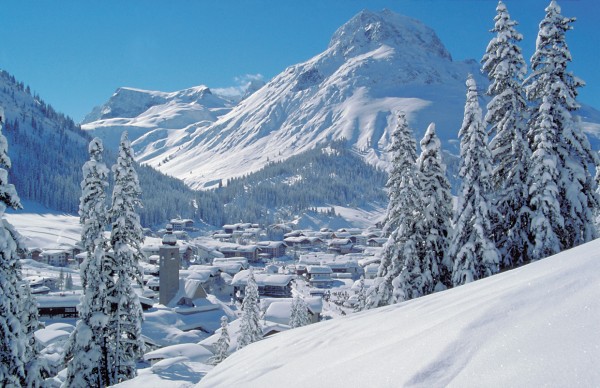 The White Ring was founded in 1940 by Sepp Bildstein who wanted to combine Lech and Zurs together. As one of the most iconic ski circuits in Europe, thousands pour in the White Ring circuit each year. There are three potential starting points for the route; Lech, Zurs and Zug. On our ski away day, we start the White Ring at the Rufikopf gondola in Lech. The ring consists of 15 lifts which then allow you to ski 3 red runs, 3 blues and one ski route linking you from Zurs to Zug. By lunchtime we head to the Cresta restaurant on the home run blue 34, allowing the cruisey blue group to join us for lunch. 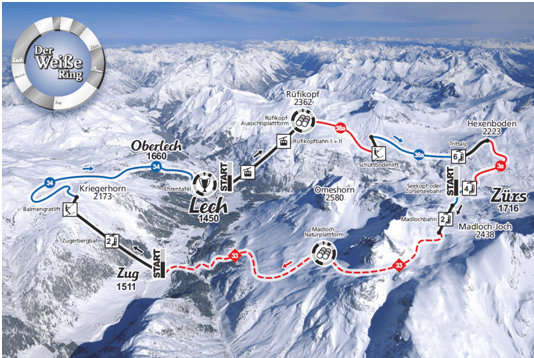 The cruisey blue route is slower paced but no less enjoyable and the backdrop is spectacular no matter which path you choose. As the namesake implies, the group cruises through an array of the blue runs, meeting up at the restaurant at 12:30pm. After lunch, both groups head over in their groups to the new area of Warth.

Warth is new to the Arlberg region as of last season. It has added 60km of skiing and a variety of blues, reds and blacks however, due to safety reasons we are not allowed to social ski down a black run (though for those of us preferring the cruisey blues – this isn’t such a problem and for anyone else, you’re more than welcome to return there later on). In Warth there is also a slalom timed race, a BMW photo opportunity and a video slalom for you to demonstrate your well honed skills! 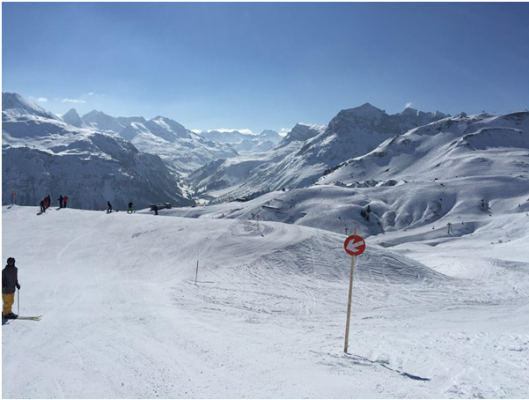 At 4pm we meet at the bus and head back to resort comparing photos, laughing at the videos and often partaking in a sing song along the way. Again it takes just 20-25 minutes to get back to St Christoph where you’re back just in time for afternoon tea!

If you’re travelling solo this year you may also be interested in our brand new solo ski chalets designed specifically for single travellers.  Currently on offer in Val d’Isère and Les Arcs, find out more here: Solo Ski Chalet Package.