In life, it’s extremely easy to sit happily in the comfort zone, whilst it’s very difficult to break out of a rut. But what are we all missing out on by saying no to new experiences, or being apprehensive when travelling to different countries?

We’ve conducted a survey to allow people the chance to open up about their hobbies and their travel fantasies. How many people out there actually throw caution to the wind and pursue their dreams in life? Well, that’s exactly what we wanted to find out.

Dreams of the slopes

We try a lot of sports in school, often deciding what we like there and then. But, how many of us actually take up a new sport in later life? Half of the people we surveyed felt that the fear factor of trying a new sport was too much to overcome, whilst it was the ski slopes that were most alluring with 40% of people most attracted to skiing and snowboarding if they were to take up a new sport. 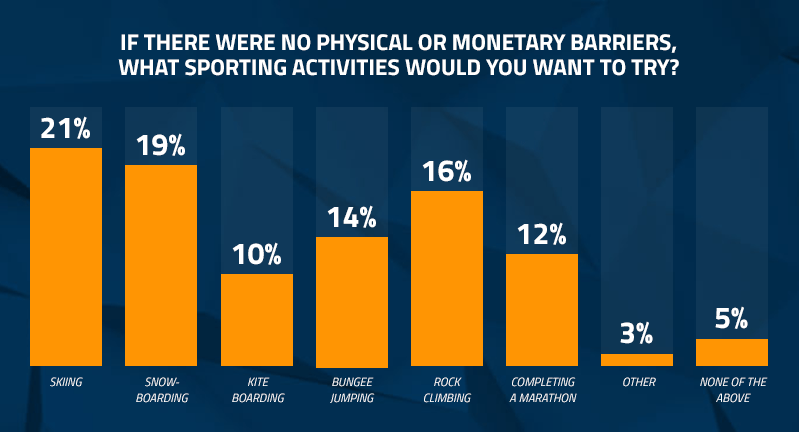 Where the everlasting battle of the sexes is concerned, it was the men who succumbed to the fear factor more than women, with 48% admitting that this was the reason behind their decision not to take up a new sport.

The men triumphed over the women when it came to extreme sports however, with 30% stating that they would dare to try bungee jumping, with only 20% of women admitting the same. We’ll call it a draw, shall we? 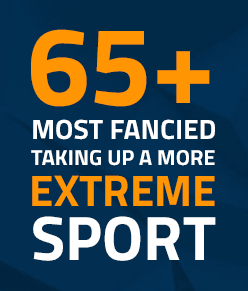 It wasn’t just the classic men vs. women rivalry that our survey brought back into focus, the age debate was highlighted too.

It seems that the younger we are, the more timid we can be, as 18-24 year-olds came out as the most reluctant age group to give a new sport a try. Getting slightly older, 25-34 year-olds came out on top when it came to throwing fear out of the window and trying something new.

Perhaps the biggest surprise of our survey was that respondents aged 65 or older came out as the age group who most fancy taking up a slightly more extreme sport than the usual likes of tennis and squash.

Skiing and snowboarding – that’s what the older generation would like to have a go at! We may stereotype them as members of the local lawn bowls club, but according to our survey, it does seem that the pensioners are showing the teenagers up! 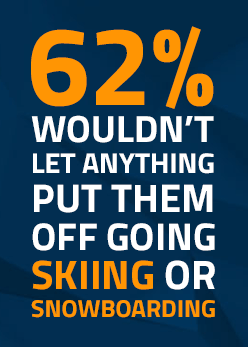 Abroad and at home

The biggest reservations people have about holidaying abroad in general, are the costs, the language barrier and a fear of flying. However, one type of holiday which came out as an exception to these rules was snowsports, with a huge 62% of people feeling that they wouldn’t let anything put them off going!

Throughout the UK, Welsh people were the biggest fans of home comforts, with 16% admitting that the main reason they wouldn’t go travelling is because they would miss home too much. The survey also suggested that reservations about travelling seemed to ease with age, as older people tend to worry less about other people’s opinions of the holidays they go on.

Through the survey results we achieved, it appears that many of us get to the later stages of life before we summon the courage to do the things we’ve always wanted to do. Maybe if we all threw caution to the wind a little earlier, we could all start living those dreams. After all, there’s no time like the present!