As a vegetarian living in Switzerland for the summer, I thought I’d share with you some of my favourite Swiss vegetarian dishes to celebrate National Vegetarian Week.

All of my previous seasons have been spent in France, and I have enjoyed many Fondues (most often consisting of Swiss Cheeses Gruyere and Emmental) and Raclettes during the winter months. These dishes are available in the summer, but are traditionally winter dishes, and are best savoured then.

My time in the summer will be split between Interlaken and Kandersteg. Interlaken is a popular resort, attracting visitors from all over the world, thanks to all it has to offer; for instance the Jungfraujoch, Harder Kulm, Schynige Platte, extensive hiking in Wengen/ Murren and GrindelwaldT and the beautiful lakes in Interlaken itself. As such, there are many international restaurants offering Indian, Italian, Mexican and Chinese food – most of which have vegetarian options. But here in the Bernese Oberland, I really wanted to sample the local dishes this region had to offer. Here are some of my favourites: 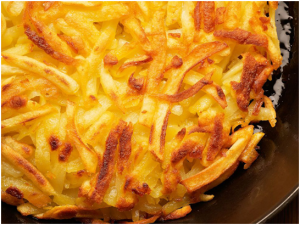 Rosti – shredded potato formed in to a large patty and fried golden brown on both sides for a delicious side dish or add melted cheese and an egg for a tasty, and affordable main dish. You also have Spatzli/Knopfli which is tiny buttons of boiled dough served drizzled with butter.

Alpler Magrone classically contains bacon, but any restaurant preparing it fresh should be able to dish it up without the meat if

you let them know in advance! This hearty dish is an extravagant version of Macaroni Cheese – adding in onion, potatoes and cream! It’s often served with pureed apples with cinnamon. 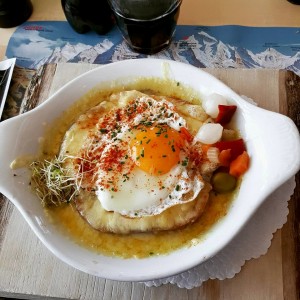 Kaseschnitten – I sampled this local dish for the first time this week, whilst I was on the rotating panoramic restaurant at the top of the Shilthorn (where James Bond – Her Majesty’s Secret Service was filmed).  Another rich, filling meal! It consists of boozy bread – the bread is normally soaked in white wine or sometimes schnapps, and then smothered in delicious Swiss cheese and then toasted. Meat-eaters can add on ham, but I went for the egg add-on, which was beautifully perched on top. 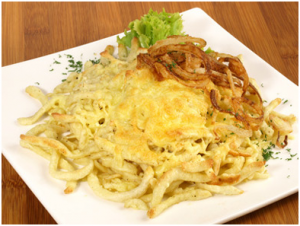 Käsespätzle, which is more of a german influenced dish and popular in Southern Germany. It’s a cheesey, noodle casserole with fried, grated onions.

What better way to finish your dining experience than with a refreshing Meringue. Meringue was invented in/near Meiringen, and most shops here in the Bernese Oberland offer their own cream-laden versions! 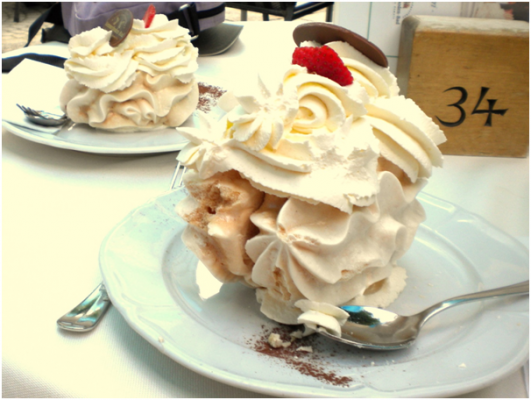