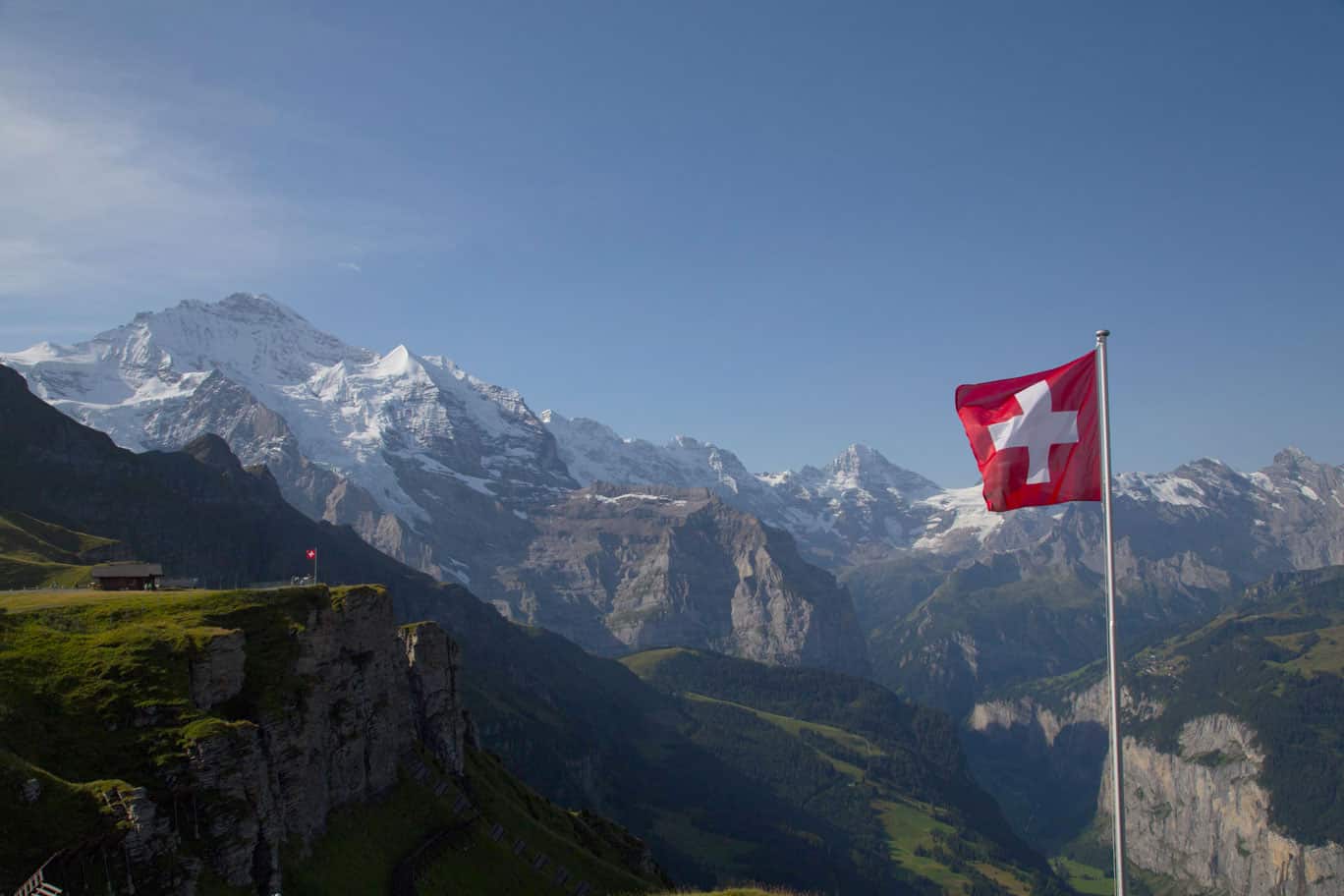 Wengen is located in one of the most beautiful places on the planet. It perches high above the Lauterbrunnen valley, where mighty cliff faces plunge vertically for hundreds of meters. Waterfalls free fall from hanging valleys into the lush pastures below. It was no surprise when I heard the area inspired JRR Tolkien’s middle earth – there is something fantastical about the whole region.

The week before I visited, a sudden burst of summer snowfall had decorated the highest mountain peaks. If anything, this made Wengen even more beautiful. The area had a picture book appearance: quaint villages amongst lush meadows, green forests and a backdrop of snow-capped mountains. Hearing of the weather, I had packed for the worst but I needn’t have worried. There was glorious sunshine throughout most of my visit and a beautiful sunset greeted me as I arrived into the village.

Wengen is a quintessentially Swiss destination. Only accessible via a charming, toy-like train that winds its way up the mountainside, the village is startlingly traditional in style. Grand, Victorian hotels loom large over rural farmhouses, a meadow field lies at the heart of the village and the occasional horse-drawn carriage will clip-clop down the pedestrian high street.

In spite of its isolation, Wengen is an excellent base from which to explore the wider Jungfrau region. In the neighbouring valley is the dynamic village of Grindelwald, a mecca for adventurous mountaineers. The village is dominated by the notorious Eiger mountain, one of the most challenging climbs in the world. Until 1938, all attempts to reach the summit from its north face had ended in tragedy.

Less adventurous thrill-seekers can head to the First mountain, on the opposite side of Grindelwald, where there are plenty of less dangerous forms of excitement. The main attraction is a massive zip-line at the top of the mountain, the First Flyer. The Flyer propels visitors down the mountain at 120kmph. It’s so fast the whizzing sound of the Flyer almost drowns out the passenger’s screams!

For those in search of a more sedate way to get down the mountain, the First Glider opened this summer, and I was lucky to be amongst the first visitors to try the Glider out. Styled in the fashion of a giant eagle, passengers are strapped underneath the wings (in what I can only describe as a sleeping-bag-like harness) and cranked, backwards, up the mountain.

The anticipation of free falling is scarier than the glide itself. The tension mounts as you approach the summit but the glide back down is incredibly gentle. There is plenty of opportunity to admire the stunning views over the valley before you. 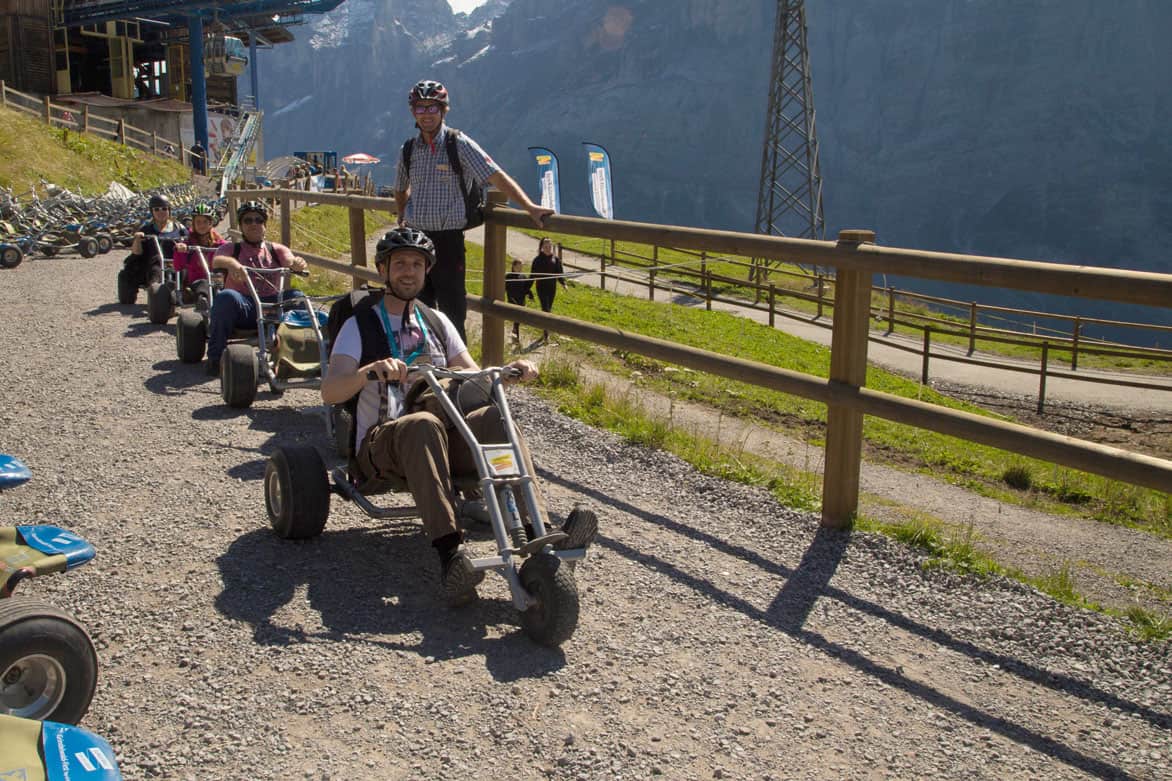 Another thrilling way to descend the First mountain is on one of the many mountain carts. A personal highlight of my trip to the Jungfrau Region was rattling down the mountainside on a three-wheeled scooter. The carts rapidly gained momentum as they hurtled down the steep mountain paths. Quick reflexes were required as I only narrowly avoided passing pedestrians!

Perched on the opposite side of the Lauterbrunnen valley to Wengen is the tiny village of Mürren. Possibly the most remote village in the area, Mürren is only accessible via cable car or a combination of funicular and train travel. While the village itself is incredibly charming, the definitive highlight in this area resides over 1,300m higher up the mountain – the Piz Gloria.

If not for the James Bond film, On Her Majesty’s Secret Service it is debatable if the Piz Gloria would have ever been completed. Dramatically situated on the summit of the Schilthorn this cable-car station was the setting for serial Bond baddie, Blofeld’s secret layer. Finance from the film helped fund the completion of the cable car. Today, the Piz Gloria is home to a fascinating museum dedicated to Bond and the movie’s production, as well as a spectacular revolving restaurant. 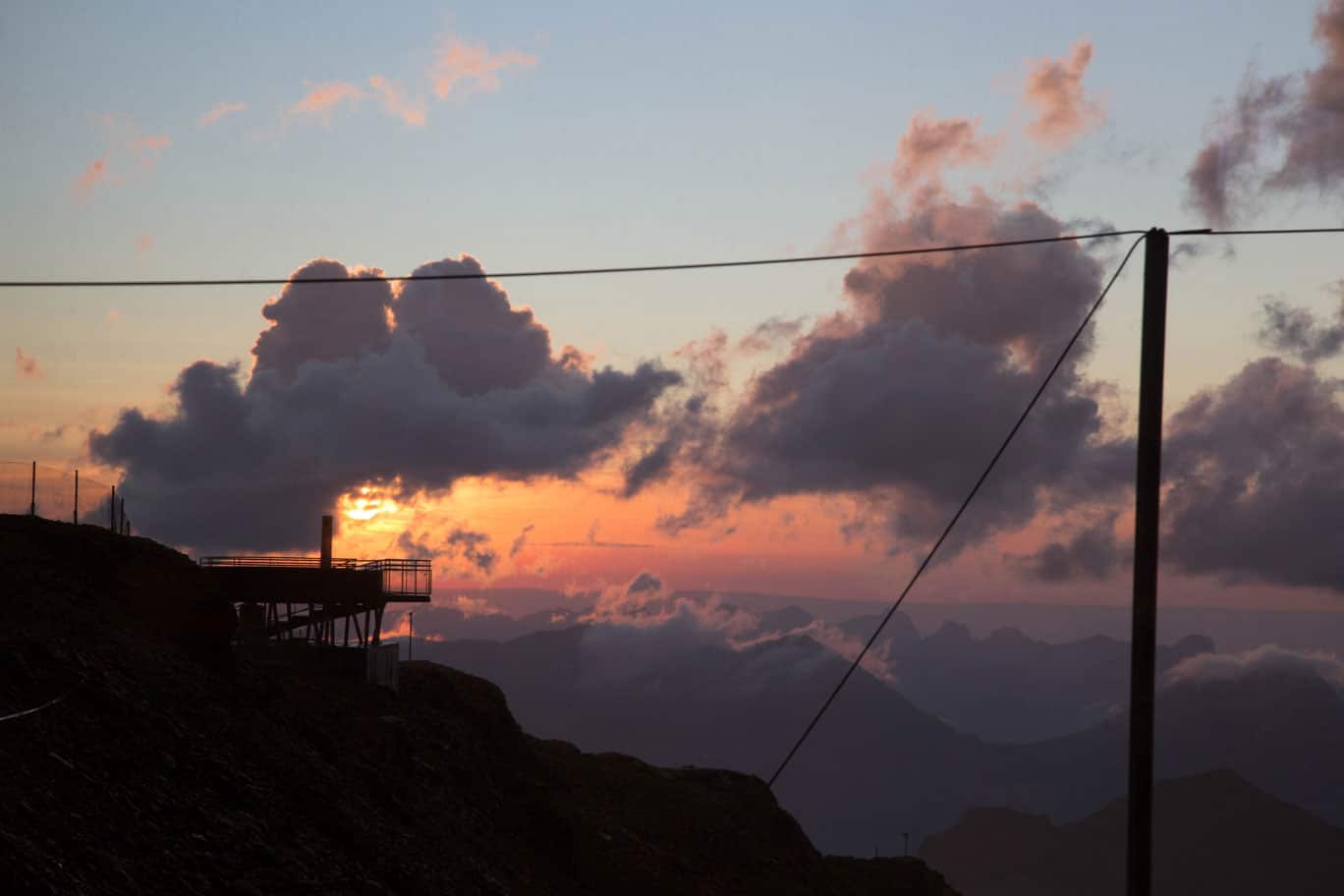 The rugged mountain peaks that surround the Schilthorn are some of the most dramatic in the area. Enjoying my 007-themed burger, I was able to admire the phenomenal views as the restaurant slowly rotated and the sunset dramatically turned the mountains to silhouettes.

Glorious views abound in this region of Switzerland. Laying claim to the “Top of Europe” is the Jungfraujoch: Europe’s highest train station, an observatory and an all-round otherworldly destination. An ice cave, deep within the mountain, is decorated with awesome sculptures but the greatest sights at the top of the Jungfraujoch are discovered by stepping out onto the glacier.

The mighty Aletsch glacier trails off into the mountains, away from the Jungfraujoch. The scene inspires a sense of adventure with the glacier snaking through some of the wildest scenery I’ve seen in Europe. Despite being a sea of ice and snow, I was perfectly warm under the beaming sun. I could have spent hours exploring the walking trail that trekked up, over the back of the Eiger. Unfortunately, this was a flying visit and I only had time for the phenomenal views. 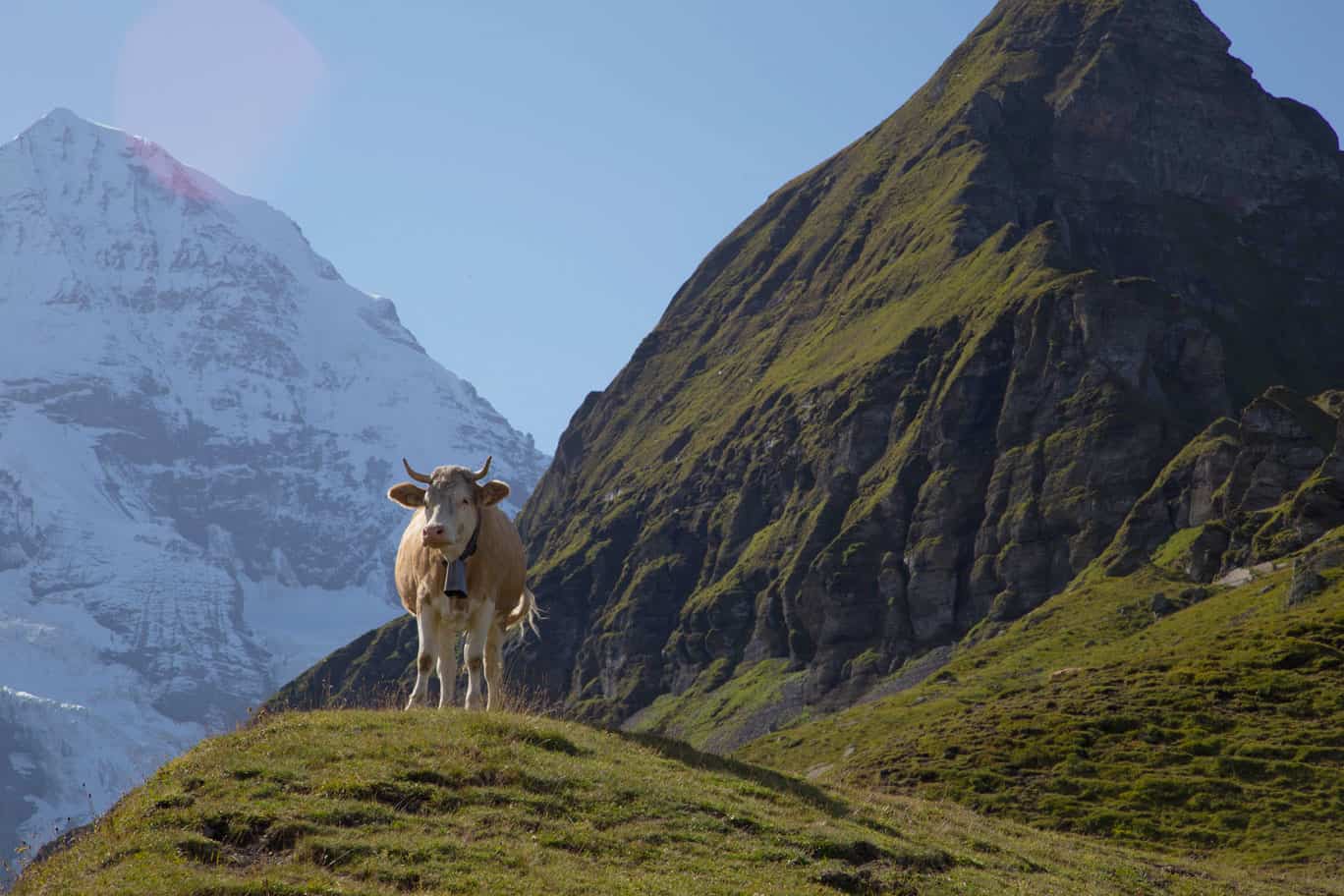 Wengen and the Jungfrau region is a walker’s paradise with everything from glacier hikes to gentle mountain paths. One of the most popular trails cuts across from the top of the Männlichen mountain to the small village of Kleine Scheidegg. The narrow path gently weaves along the side of the mountain and is easily traversed in an hour. Along the way, I encountered curious cows and epic views towards Grindelwald, the First Mountain, and beyond.

That evening I returned, exhausted, to Wengen where I was about to discover one of the village’s most charming hidden gems. Tucked behind the Hotel Sunstar, and run by the hotel’s charismatic and friendly owner, is a tiny, wooden restaurant built in the style of a Lapland kota and seating no more than 16 people.

The cosy kota was a fantastic place to meet fellow travellers. Guests had travelled from all over the world: Britain, Switzerland, America. I chatted to a Swiss family from Geneva who were visiting Wengen as part of a grand tour of Switzerland. They were impressed, as I was, by the area’s beauty and were contemplating a future ski holiday to the area.

In the centre of the kota was a roaring fire on which we were encouraged to toast our own cheese, meats and vegetables. The owner of the hotel joined, plying us with wine and regaling us with local stories and amusing anecdotes. It was a fantastic way to spend the evening and I thoroughly recommend it.

From cheese and wine to chocolate and fresh milk. My final day in the region involved a fascinating walking tour of Interlaken, which introduced local crafts, craftsmen, and some of the many local delicacies.

Interlaken, as the name suggests, is situated between two enormous lakes, and acts as gateway to the mountains of the Jungfrau region. It’s a bustling town, less than an hour’s train ride from Wengen, full of grand hotels, luxury boutique shops, parks and a casino. Amongst the cosmopolitan flair there are many small independent shops selling distinctive foods and handmade crafts. My favourite encounter on the walking tour was a quirky sweet shop called Funky Chocolate. 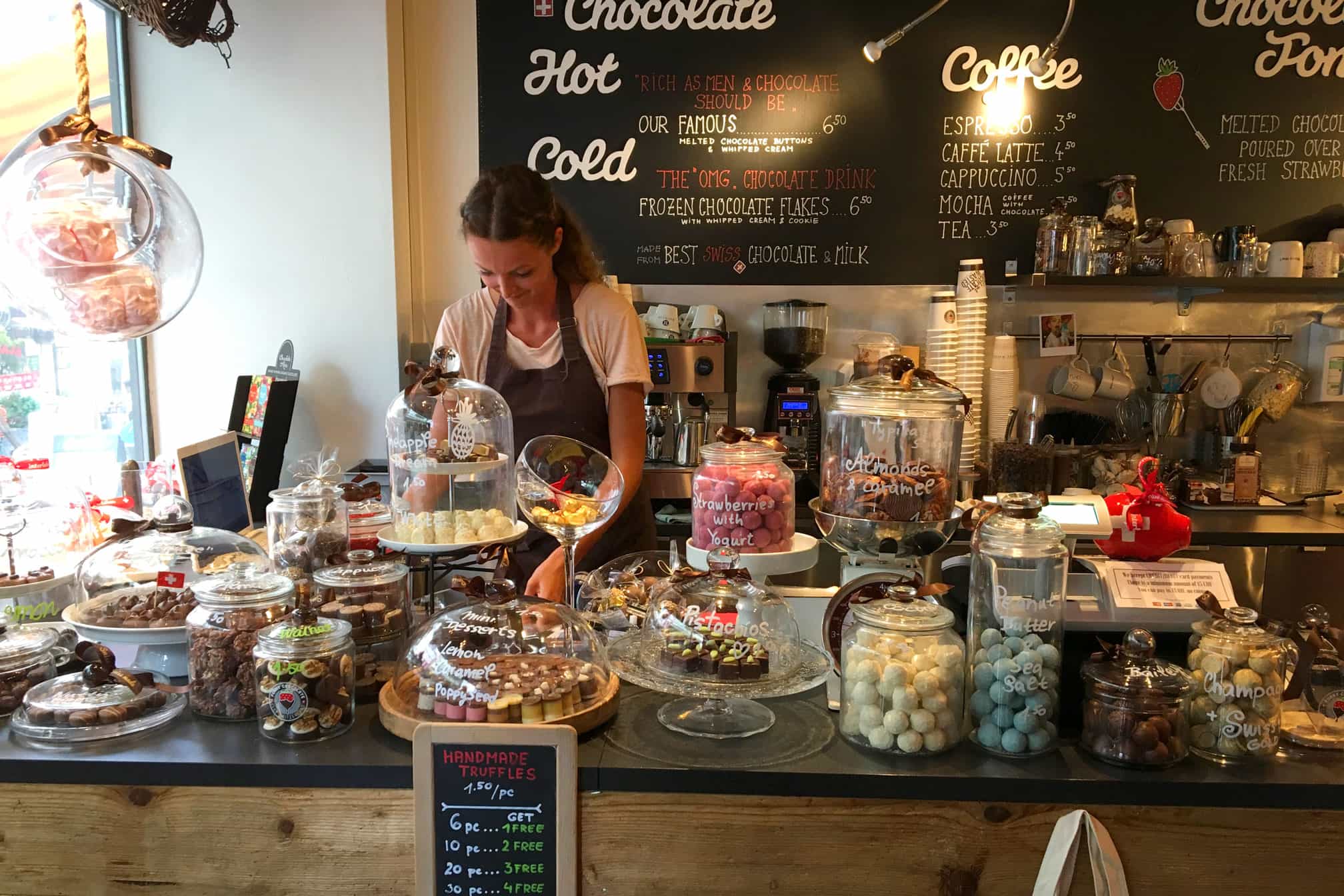 Two Czech ex-pats started Funky Chocolate in an attempt to shake-up the stuffy Swiss-chocolate establishment. The shop is full of ornate chocolate sculptures, such as skulls and cameras, as well as, sweets, hot chocolate, and chocolate covered strawberries. The chocolate tasted phenomenal and you can design your own chocolate creations in the shop’s very own factory.

The tour ended in a rustic farm on the outskirts of Interlaken, where the tour guide offered fresh milk straight from the dairy. We met with the resident cows, including five cute, baby calves. Reaching my hand out to one calf, it latched onto my thumb with its mouth. Sucking hard with its abrasive tongue, it left my hand covered in slobber – a unique end to my tour!

No visit to Interlaken is complete without a trip to Harder Kulm, Interlaken’s closest mountain. The mountain is home to a large, gothic restaurant and a modern viewing platform with a glass floor. A funicular transports visitors from the centre of Interlaken to the top of the mountain, and it’s only a short walk from the top of the funicular to one of the most outstanding views in the region.

The viewing platform sticks out prominently from Harder Kulm and standing at the end of the platform offers a vast panorama. Below, Interlaken looked like a toy town with tiny clockwork trains.  The two enormous lakes stretched out either side of Interlaken like shimmering, unfurled wings. And directly in front of me, the steep-sided Lauterbrunnen valley weaves its way towards Wengen and the mighty snow-capped peaks that dominate the horizon.

You can’t help but fall in love with the scenery when you visit the Jungfrau region. There is something special about the sweeping vistas. During my short visit, I in no way feel like I have discovered everything this truly spectacular place has to offer. I fully intend to return.

Find out more about the Jungfrau Region here >