For children and adults alike, a trip to Lapland isn’t complete without getting up-close and personal with the native wildlife; and on my trip in December I did just that with our combined Husky & Reindeer Safari!!

This compact excursion allows you to visit two neighbouring farms roughly 30 minutes outside of Levi town. Both farms sit on the banks of the Immeljarvi Lake which is frozen throughout the winter and covered in such deep snow that you wouldn’t even be able to tell it was a lake! 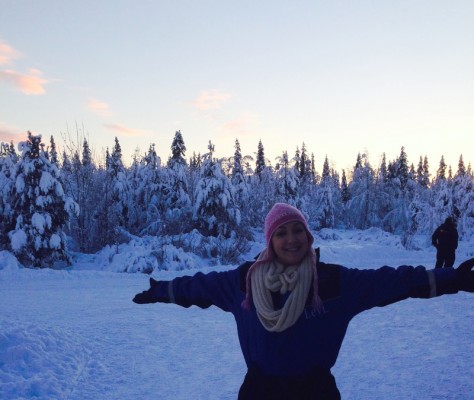 On arrival the coach was split into two groups, one off to see the Reindeer first, and the other, the Huskies. Being a devoted dog lover I was secretly hoping I would be going to the Huskies first, mostly because the rep had told me there were some puppies that were just a few months old and I could not wait to go and see them!

I was in luck, I wasn’t going to have to wait at all, as I was off to see them first. As we stepped off the coach and followed the rep down the path to the farm, sounds of barking filled the air. After a short walk we were greeted by the owner who briefly explained how the excursion would run in family groups, biggest to smallest, and gave us some history around the use of sled dogs.

She also explained to us that her husband and son were champion dog racers, and the dogs we would see and use for our excursion, were part of their award-winning team! She also told us to keep an eye out for all of their medals in the kotta hut where there were biscuits and hot berry juice waiting for us later. We were the informed  that we were welcome to walk around the farm and see and stroke all of the dogs, keeping an eye out for the one dog that was half wolf!

I was one of the last people to go on the sled ride so I used the time to go and see the new puppies, they were tiny and fluffy but full of energy running around their enclosure and barking just as much as the adults. I then wandered around the farm, going to see all of the beautiful huskies with their distinctive pointed faces and strong colours – black, white, grey and copper red with brown or piercing blue eyes! 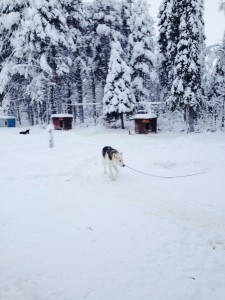 When it was my go I climbed onto the sled, extremely excited and not knowing what to expect.

The huskies were jumping and barking constantly, trying desperately to run and pull the sled forward, but don’t worry, the break was firmly applied! Once the musher could see that I was comfortable and ready to go, he released the break and pushed the sled forward just slightly; as soon as the huskies felt their leads loosen they were running as quickly as they could, quickly pulling the sled along the snow.

They picked up speed very quickly, all moving at the same pace, keeping perfect formation at all times, pulling the sled over the frozen lake and info the forest. We went deep into the forest, through large banks of snow and under trees so snow laden they were bending over. Then we went round a sharp corner and back onto the lake, picking up speed again as the terrain was more level; as we arrived back at the farm the musher slowed the dogs and guided them in towards the farm entrance, applying the brakes slowly until we came to a stop. As soon as the sled was halted the dogs were barking and pulling at their leads ready to go again!

After my sled ride I went to get a hot berry juice and biscuit from the Kotta hut. Inside was a warm and welcoming log fire, and as I sipped my berry juice I looked at all the trophies that has been won by the teams, all proudly displayed on the walls. After this we walked across to the reindeer farm, it was much quieter here but there were reindeer everywhere – a real winter wonderland! 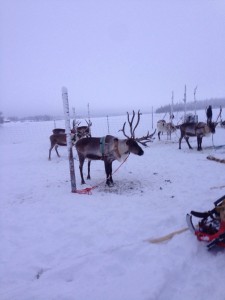 We were again greeted by the owner who explained that all reindeer in Finland are owned by someone, even if you see one wondering alone, it has an owner. She gave a brief overview of the excursion, how each reindeer has their own personality, some like to run, some like to take it slow, just like people, they’re all different! We were then given a safety talk before each family was shown and helped into their sled.

Unlike the huskies that were constantly raring to go, the reindeer where much more relaxed, happily munching food as they waited for us to settle into the sleds and get comfortable before each being attached to the sled by a harness. Once attached to the sled, they were released one at a time onto the single track that runs over and around the frozen lake. 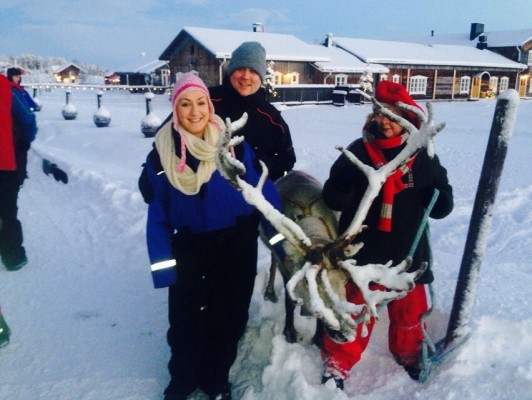 The first one to be released shot off at full speed! Then my reindeer was released and I was expecting him to shoot off as well but it very quickly became apparent that he did not enjoy speed at all! In fact, he had no interest at all, in chasing his friend who was very quickly getting away from us. My reindeer simply wanted to take it slow and steady.

I was quite happy with that, to simply sit and leisurely watch the scenery as we drifted around the lake. The sky was a beautiful pink colour and there was so much to look at; the huskies move so fast it’s not so easy to take in the breathtaking scenery.

As we reached the end of our ride, the reindeer were enticed back to the farm with food, at which point my reindeer definitely picked up the pace! Once the reindeer are back in their spot, the guide lets you know that you can get out of the sled, although I didn’t really want to as it was really quite warm and comfortable but I really wanted another berry juice – it was very scrummy, as were the biscuits!!

Both of these excursions are a fantastic way to get up close to the animals. For me, they really made my holiday; the speed and sound of the huskies mixed with the serenity of the reindeer, while being pulled through the tranquil landscape really is a magical experience!