Postojna lies at the north end of the Pivka River valley and due to convenient transport links and its location between Ljubljana, Trieste, Gorizia, and Rijeka has long been an important centre of the Notranjska region. 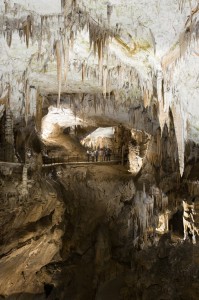 Today, Postojna is a modern, clean, and friendly city. It acquired the stamp of a tourist city primarily from the world-famous Postojna Cave, as well as smaller caves in the area such as Otoška jama, Pivka jama, and Črna jama. Only ten kilometers from Postojna, the astonishing Predjama Castle (Predjamski Grad) perches in the middle of a high cliff, exciting the imagination with legends about the medieval robber baron Erazem Predjamski and the siege of the castle that ended with his gruesome death as a result of a servant’s treachery.

Postojnska Jama (Postojna Cave) conceals one of the largest networks of caves in the world, with 21 km of underground passageways. A wonderful miniature train takes you through the first 7 km to reveal a succession of well-lighted rock formations.

This strange underground world is home to the snakelike “human fish” on view in an aquarium in the Great Hall. Eyeless and colourless because of countless millennia of life in total darkness, these amphibians can live for up to 60 years!

Temperatures average 8°C (46°F) year-round, so bring a fleece, even in summer. Tours leave every hour on the hour throughout the year. I was lucky enough to spend a day here  and whilst I did get to send a postcard from down under (the caves boast the only genuine underground post office in the world) I did miss out on my chance to be a movie star…

“Nayak”  is the first Indian movie to have been shot in different locations across Slovenia namely, Ljubljana, Bled, Piran and Postojna caves in August and September last year. The shooting here lasted 7 days which in the movie means showing one song about 6 minutes long.

It has been widely acknowledged that the stunning underground environs of Postojna caves, the medieval coastal town of Piran and the alpine resort town of Bled played the perfect backdrops for the duo’s dance moves. The movie was even recommended by the Indian Minister of Tourism, Chiranjeevi PhD himself, as he is the father of leading male actor in the movie. It is expected, that the movie will be watched by as much as 10 million Indians and me!

Other facts you will want to know:

– 21 kilometres of underground passages, galleries and magnificent halls
– 800 years since the first known visitors’ signatures
– 200 years of the modern age tourist history
– 34 million visitors from around the world
– More than 150 state presidents, kings, queens, emperors and empresses have visited these caves
– Cave railway since 1872
– 150 species of subterranean animals
– the only genuine underground post office

More about Slovenia and more on a personal journey through Slovenia