St Wolfgang was the bishop of Regensburg in the 10th century AD, when, being frustrated with mankind’s propensity towards vice, and with the threat of a civil war, he decided to seek solace in nature. He went first to the beautiful Abbey in Mondsee, where he had many discussions with the Abbot. Soon, he decided he needed some time in complete seclusion, in order to re-establish his connections with God and reconfirm his religious beliefs.

With permission from the Abbot of Mondsee, he moved to lake Wolfgang, then called Abersee and which at that time belonged to the Abbey of Mondsee. Choosing the seclusion of the mountains, he lived in a cave on top of what is now called the Falkenstein rock, which emerges from the lake and rises 115m into the Schafberg mountain near Fuerberg. There, according to legend, the devil tried to make Bishop Wolfgang give up his abstemious, hermit-like life. He tried to crush the mountainside around the Bishop, and, in the cave on the top of the Falkenstein, there are three hollows in the rock where Wolfgang, with God-given strength, prevented the mountainside from crushing him, the three hollows being formed around his outstretched hands and his head. 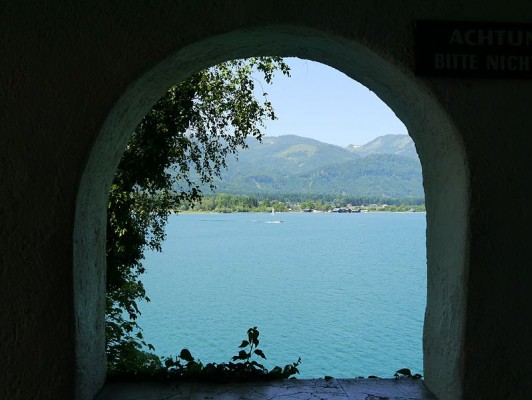 A further achievement of the Bishop was to enlist the Devil as his assistant in the building of the church in St Wolfgang. According to legend, the Bishop fooled the Devil into agreeing to build the church for him, in return for the soul of the first pilgrim to cross its threshold. Faithfully, on its completion, the first pilgrim entered the church, and the Devil took its soul down to Hell – only to discover that Bishop Wolfgang had dressed up a wolf in a pilgrim’s clothes! The Devil had been fooled again; and this may be why wolves howl at night, because they long for the soul they no longer have.