‘The Chalet School’ didn’t ring any bells whatsoever when Lee, a previous representative in the Achensee, told me that I had to know something about the novel’s connection to Pertisau, before I were to arrive in resort. As a child, I was an avid reader of the girls at St Claire’s, Malory towers and Enid Blyton’s famous five, but I never came across the chalet school (it was a little bit before my time!).

However having been in Pertisau for over a month now, I’ve started to become quite fascinated by Pertisau’s literary connection to the chalet school series; to the extent that I am now reading one of the novels, taken out from the local library!

I received a big smirk from the lady at the tourist information, who couldn’t wait to tell me one of the possible ‘schools of thought’ for the location of the chalet school itself – the hotel Alpenhof, which now lies old and derelict behind the Hotel Post. It’s very well hidden, but having run past it several times, I couldn’t help feeling that there was something special about this building and then I found out why! Whilst most of the hotels are rapidly undergoing renovations, this one stands still, in a time warp all of its own.  I’ve heard rumours that it has been left abandoned due to a dispute over a will. I think this adds to the mystery of it all! 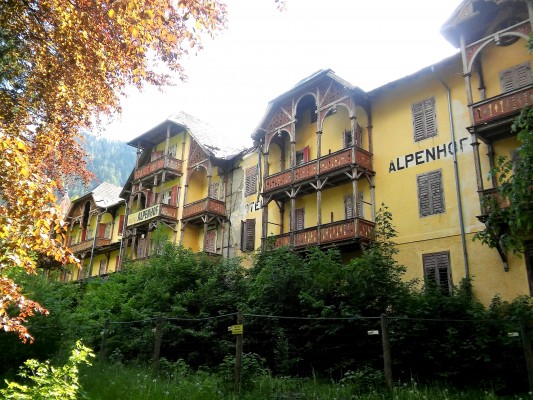 The author of the chalet school series was Elinor Brent-Dyer (1894-1969), who was born in South Shields, Tyneside UK. She was educated privately in South Shields and returned to teach after she had been to the city of Leeds training college. She was interested in theatre and was a keen musician.

The chalet school then moves to Guernsey, an island in the Channel Islands, during the Nazi occupation, as it was impossible to have kept even a fictional school in Austria during this time. Then it moved again to Herefordshire for the duration of the war, then an island off the south west coast of wales and then finally to Switzerland.

If you are coming to Pertisau, already been or just left, then the ‘School at the Chalet’ is a must read, even if you are not a literary fan like me! Names have been changed, for example; Pertisau is named ‘Briesau’ and Lake Achensee ‘Tegernsee’ but nevertheless all the places and the context seem so real and relevant even in 2016. This is quite remarkable considering the fact that the novel was published all the way back in 1925, over 90 years ago! 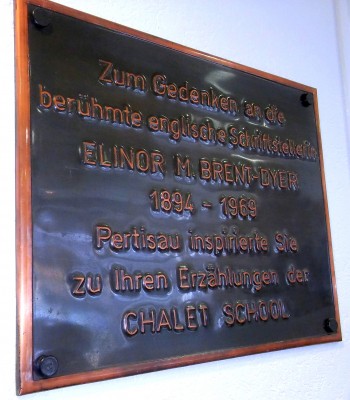 The plaque pictured, can be found in the library, which is in the tourist information office and was placed there in 1994 by Martin Spence, on behalf of the friends of the Chalet school. Do go in and have a look! Happy reading!