Lake Orta really is a hidden secret. Full of quaint cobbled streets, it is pure serenity and is almost absurdly beautiful. The Milanese call it La Cenerentols (Cinderella) because it has long been considered the secretly superior sibling of both Lake Como and Lake Maggoire.  No one who has visited the lake particularly wants to talk about it too much to save its charm. I am torn because though I could not agree more, I can’t help but share my experience of Italy’s best kept secret and my narrative of this idyllic part of the world.

The lake is glacial in the alpine foothills of Italy, 1000 feet above sea level with only around 1200 residence. In the summer the lake glistens silver-blue but if a storm rolls in over the mountain the lake looks equally majestic in its slate like splendour.

Orta San Giulio is the main town built on the slopes of Sacro Monte forming a peninsula that protrudes out on the lake. The towns architecture is breathtaking; every step, every turn and every view is a celebration to your eyes. I am not sure I can really put into words Orta San Giulio’s beauty so I thought I would share pictures with you instead (but not too many of course).

Isola San Giulio, named after St Giulio, is a little isola (Island in English) which appears to float in the centre of Lake Orta. It is known for its amazing Benedectine monastery, the largest monastery of enclosed nuns in the world that only stretches 275 metres long by 140 metres wide. Although small, the island is steeped in history and legend. St Giulio is said to have arrived at the island having defeated the waves of a storm, wild animals and dragons in the 4th century AD. After his death a small chapel was built in the 5th century and in the 19th century the seminary was built. There remains to this day, an air of peace over the island. 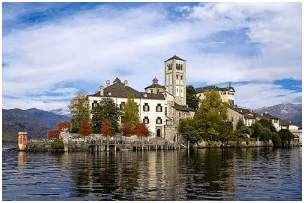 Is there anywhere that can outshine the pure tranquillity of Lake Orta? I can honestly say I haven’t found anywhere quite like it.