Most modestly described, the Madonna Della Corona is a stunning church nestled within the rocks of Monte Baldo; a peaceful sanctuary for stillness and meditation. You can reach the church of the Madonna Della Corona via two routes though it is accessible from any one of the resorts surrounding Lake Garda.  The first, and the simplest, is from the town of Spiazzi where you can find the Stella Alpina Residence, a grand mansion presiding over the steps leading up to the church.  If you follow this path you will gently wind past 14 statues; each statue depicting a stage of crucifixion (Via Crutis). Once you reach the final stage, the resurrection, you will find a short tunnel carved out of the rock face itself.  Taking this tunnel, you will emerge outside of this spectacular structure.  History shows that the first church was inaugurated here in 1580. Previous to this, the site was used as a hermitage.  Later, it was rebuilt and named a sanctuary in 1625 by the Knights of Malta. 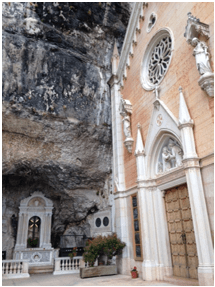 The Madonna Della Corona herself is a small statue that can be found in a shrine, at the back of the church, in a small garden. This artefact comes with its own legend; Lights were seen by local alpine people who curious, decided to investigate the source. The lights were coming from the bottom of the cliff inaccessible from any road so the men climbed down the cliff using a rope. Once at the bottom they saw the statue of the Madonna Della Corona. They took the statue and carefully raised it up the cliff edge. The men rested for the night after their hard climb and when morning came they found that the statue had vanished. One of the men climbed back down the cliff face to look for the statue again and there she stood, in the place where they had found her the day before. Once again, they took the statue and placed it in a shrine, but once again the statue vanished in the night. At this point, one of the men proclaimed that it was the Lady’s desire to stay among the rocks so they built a shrine within the walls.

It follows that the legend of the Lady spread worldwide until it was heard by some of the knights of St Giovanni. These Knights came on a pilgrimage to see the Madonna and recognised the statue as one which had gone missing from the island of Rhodes. The knight proclaimed that the Madonna had been carried by angels, to the rocks of Baldo. 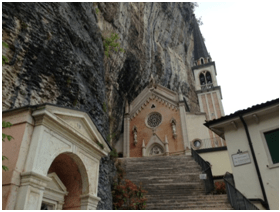 The church is stunning, the views spectacular (although if you are not a fan of heights maybe don’t look too far down) and this sanctuary is well worth a visit; it is unique or at least something I have never seen the like of before. When you think of Italy you think of the incredible cities and the stunning lakes, but it is the small unique places that also help to make it such a fantastic country to visit.