“Hey, so where are you working this winter?”

This was the gist of so many conversations I had before to coming out to work here this season, to what is, one of the lesser known ski resorts. In many ways, I’d love to tell them all how great Andorra is, but in others, I’d simply prefer to keep it our little secret!

For anyone who hasn’t been before, Andorra is a tiny principality between France and Spain, and when I say tiny I do mean tiny, for instance, it takes roughly an hour to drive between one side and the other! Don’t get me wrong though, this drive is along stunning mountain roads which lead to small townships each with their own distinct personality and individuality. In winter all of these become fabulous ski resorts in their own right.

The largest of the ski areas is the Grandvalira which holds 210km of pistes and hosts numerous FIS world cup races. This is certainly an area not to be sniffed at!

Right at the end of the Grandvalira (which stretches almost the entire length of the country) is Pas da la Casa, nestled in the mountains at a whopping 2100m and sitting just on the French border. This is the place I’m calling now calling home!

And home sweet home, it really, truly is. Pas de la Casa is undoubtedly one of friendliest place to ski, to eat, to live, to drink, to work and to come on holiday. It’s not Courchevel or Val d’Isere; yes, it IS absolutely different from those well known, ‘go to’ resorts but that’s because it’s better! And with a world class ski school, affordable lift passes and accommodation, it offers everything that you could possibly want with a great party atmosphere to boot.

Voted one of the best venues in the world for après and holding its own with all the big hitters, Pas de la Casa offers great on the piste terraces and live music to enjoy after a long days skiing in some fantastic terrain. Andorra is also well know for tax free shopping and you can make the most of this with well known high street stores such as the Body Shop, Mango and Superdry all here in resort. 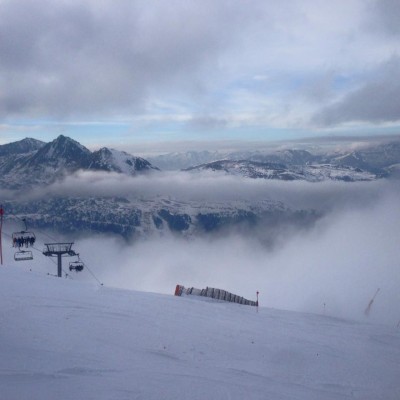 So there you have it; I’ve let slip about my little hidden gem in the Pyrenees! Hopefully I’ll see you here soon…