Why is the ski safari from Selva to the Hidden Valley so special?

Quite honestly, the age old expression that seeing is believing really does apply here but I’m not about to let that stop me. After all, it’s considered one of the most beautiful runs in the world!

The trip starts with a short journey  through the Dolomites Mountains by coach. Travelling over three passes you’re able to admire stunning views over the Sella Group and the Mezdi Canyon – one of the most celebrated off-piste terrains in whole of the Dolomites – before passing through Corvara and the picturesque village of La Villa. We take this opportunity to share our knowledge about the Dolomites and their inhabitants – the Ladin people. We tell them about the origin of the name of the famous Sella Ronda ski tour ( the “ Round Saddle”), and how these mountains were born from the coral reefs which existed here 200 million years ago. This in turn explains why the Dolomites mountains are so wonderfully unique and display such spectacular shapes and colours!

We talk of the Ladin people, the wonderful inhabitants of these valleys who were caught in one of the most dramatic battles during the First World War. Having to fight not only against their enemies but also against the the frozen temperatures, they then continued their battle to preserve their identity, their traditions and their language. And also about Oetzi, the 5000 years old warrior discovered under the Marmolada glacier, his resting place now at the Museum in Bolzano. Phenomenally, he is the best preserved mummy of this kind in the world.

The time  always passes quickly and we arrive at Cinque Torri- “The Five Towers”- a lesser known area of the Dolomites where the pistes are quite often deserted. Views are fantastic all around and in the middle of this territory lies this group of rocks- Cinque Torri- the place Sylvester Stallone chose for the dramatic rock climb at the opening to the film, “The Cliffhanger”.

After skiing some of the most picturesque pistes in the alps, the best part is yet to come. We then take the cable car from Passo Falzarego, climbing up against a vertical wall of 700m to reach the top of the Lagazuoi Mountain at 2.800m. The views from there are breathtaking; we can see the Marmolada Glacier in the distance, the Col Gallina and Cinque Torri, the Tofana Mountains bordering Cortina D’ Ampezzo and the vertical cliffs heading down the “Hidden Valley”- locally known as Armentarola Red Run. Skiing down here we stop again and again. No matter how many times we ski it, it’s hard to take your eyes away from this view- the shapes, the colours, the frozen waterfalls, and the sense of wilderness and the most impressive powder surrounding us.

When we meet down at the bottom of the valley, it’s impossible to avoid hearing how amazing everyone found the experience and quite frankly, I can’t agree with them more! Now it’s time for a delicious lunch at ‘Capana Alpina’ hut where Flavio and his family are so welcoming and we also love the two dogs who play up on the rooftop. 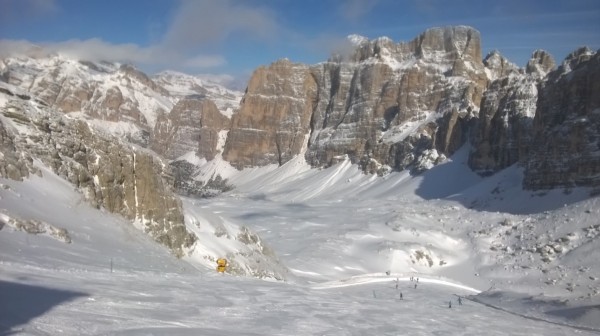 After lunch there is a nice surprise, something very different indeed. As there are no mechanical lifts for the next part of our journey we take the traditional way which is to be towed by horses. Have you ever done that? Locals arrive with their horses and carts, each with two big beautiful horses. The carts have ropes behind so we grab the ropes and are towed, sometimes having to perform a little slalom. It costs only 2.5 Euros, and truly is a remarkable experience! 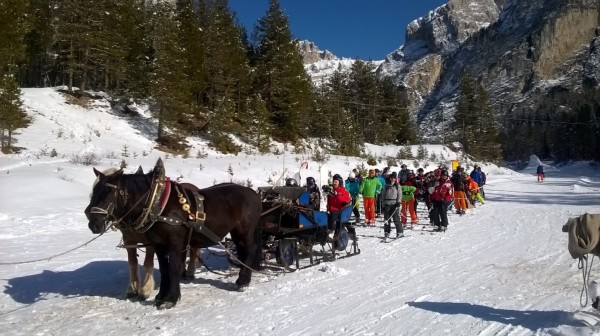 Then the gentle slopes of Corvara take us back to Selva after a day that everyone remembers as wonderfully unique. If you’re heading to Selva the ski safari is without a doubt, a must do excursion!