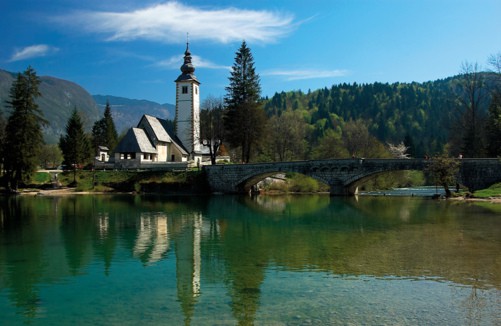 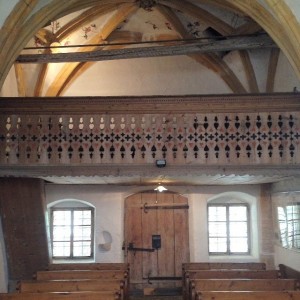 St John the Baptist has a symbolic meaning for the recognition of Bohinj in the national and wider scale mostly due to its dominant location on the Eastern part of Lake Bohinj. It was constructed in the middle of the 11th century.

Its exterior and interior are painted with Frescos that date from the 14th to the 16th century. It is mostly famous for its frescos on the Southern side with the images of St Christophe in three layers; the oldest layer dates back to thirteen hundreds, the second to the fourteen hundreds and the third layer to the second quarter of the 16th century. 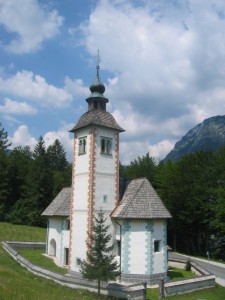 Another church found beside Lake Bohinj, the Church of the Holy Spirit, was built in the second quarter of the 16th century, but the archives mention a church here in the second half of the 15th century. The style is Baroque and its special features include a roof in the shape of a camel’s back which is linked to a local legend and the fresco of St. Christopher on the exterior north wall by the painter Matija Koželj.

The story goes; many years ago Bohinj suffered a major drought and the local farmers and villagers were scared that the rain would never come again. Their crops were dying and they were losing hope. They decided to make a journey to the Vatican to ask the Pope if there was anything he could do. The Pope told them they should return to Bohinj and immediately build a Church with a roof in the shape of a camel’s back; this would bring the rain. The locals returned to Bohinj and began to build. As they hammered in the last brick, the rain began. It rained for days, the crops were saved and they never had a problem with long droughts again.

You can visit both Churches by foot from the centre of Bohinj. Entrance is free with the option to leave a donation if you chose.