Slovenia is a country full of Myths and Legends and as you travel around the country you will understand why; we have so many special natural attractions that it is easy to imagine what inspired sure stories. The story of the Goldenhorn is particularly important in the Alpine region. On the shore of Lake Bohinj you will even find a statue of the Goldenhorn though there is no plaque to indicate its significance so let me tell you; 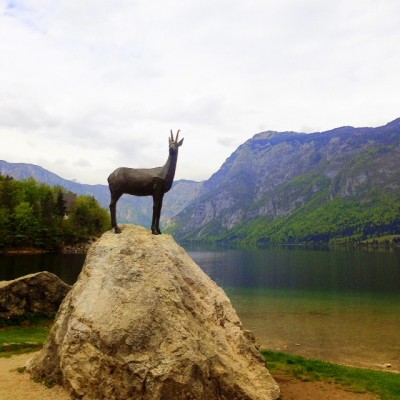 High up in the Julian Alps lived magical women, goodhearted maidens who, even today, the people in the area still remember with gratitude. From time to time they appeared in the valley and gave help to the poor.

On the rocky mountain face grazed the white goats of the maidens; these animals guarded the mountain and kept the farmers and mountaineers safe. These goats were led by Goldenhorn and the White women made him invulnerable. If a shooter were to wound him, a magical flower called the Triglav, rose from his blood and on consuming only a single one of these leaves, Goldenhorn would be immediately healed.

In another story you read that his gold horns were the key to the secret treasures on the mountain which are guarded by the hundred-headed dragon!…Though that is another story altogether…

A young and brave hunter from the Trenta Valley fell in love with a beautiful girl and managed to win her heart. However one day, a rich merchant from Venice came and tried to gain her attention by giving her golden jewellery. As the hunter approached the girl, she mocked him. The hunter was desperate and left.

Persuaded by another hunter, called the Green hunter, who was said to have brought about the untimely fate of several honest boys, he decided to go that very night to find Goldhorn and take his treasure.

The hunters found Goldenhorn, shot him and then followed the dying animal as he dragged himself onto a narrow, rocky ledge near where the Triglav roses grew. The Green hunter forced the Trenta hunter on to catch the Goldhorn before it ate the healing Triglav roses but it was too late. The Goldhorn had already been rejuvenated. He ran towards the hunter, who being blinded by the golden horns, lost balance and fell from the mountain.

Next spring the water brought his body past the village. In his hand, the hunter held a bunch of Triglav roses.

When in summer, the shepherds returned to the Lake valley, they found a rocky place instead of the paradise they had once known; the women had left the place forever and with them took their beautiful white goats. Goldenhorn had in his rage, destroyed the meadows, never to return.

And that is the story of the Goldenhorn!

There are a few variations of the tale but from what I have researched, read and been told by locals, this is believed to be the most accurate. A sad tale, but a good lesson for all, to respect nature and local wildlife, wherever you happen to be!